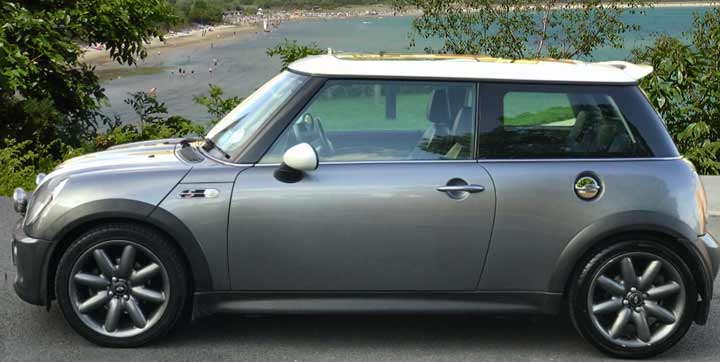 Very much an icon of the swinging 60s, and a completely classless car that was driven by princes and paupers, the Mini did almost as much as the Japanese to destroy the British motorcycle industry. All of a sudden there was a car which could seat four people for little more than the price of a motorbike and sidecar.

Bubble cars, flimsy and dangerous little conveyances that they were, disappeared off the market when they were forced to compete against such a bargain priced real car.

And that price was its biggest drawback. It was in production for more than four decades; and it never made a profit. The fact is, it created a thumping great loss. Whether this was caused by the labour problems that BMC/British Leyland were having, or gross errors by the accountancy team, is something that could be debated at great length.

It was a masterpiece of design, with a name which was very apt, because nearly all of it's length, some 80 percent, comprised cabin space. Every inch of non-essential space was squeezed out; even the engine was mounted sideways for the first time (it is now very common) to save a few precious inches.

Roadholding was superlative; this was a car that boy racers could throw around corners with far too much confidence. The suspension, instead of utilising springs, which would have meant raising the body shell further off the ground, was based on rubber cones. This didn't do very much for comfort, creating quite a bumpy ride, but it helped to keep the steering firm and responsive. In many ways driving in a mini was like driving in a four seater go-kart.

It was a really basic car of course. Designer Alex Issigonis insisted on this. He wanted a car which would be easy and fun to drive without any unnecessary fripperies; he particularly hated car radios which he considered to be dangerous distractions.

The mini itself was the product of the fuel shortages in Great Britain, which followed the Suez crisis in 1956. BMC put their existing projects on ice to design a car that could not only carry four people in reasonable (that's debatable) comfort, but which only sipped fuel into the bargain.

Racing success helped promote it. The Cooper was born out of collaboration with car racing legend John Cooper who weaved his magic on the little car, enlarging the engine capacity from 848cc to 997cc, fitting a close ratio gear box and twin carbs to help it to go, and front disc brakes to help it to stop. Coupled with the superb roadholding this made it a very competitive rally, as well as road, car. An even more punchy 'S' version followed shortly afterwards.

He designed this car so well that Minis won the Monte Carlo rally in 1964, 1965, and 1967! There are many who believed it should have won in 1966 too; but the judges disqualified it because it was claimed that the headlight arrangement infringed the rules; a claim which was hotly debated afterwards. The winner (or rather the car that was awarded first place) was a Citroen DS; surprisingly enough it also had so-called illegal lights, but no one seemed to notice this. Claims that the French judges were biased were of course completely inaccurate.

The best bit of advertising they had was the popular film 'The Italian Job' in which a bunch of loveable (!) criminals pulled off a bullion robbery in Rome by paralising the city's traffic whilst they zoomed up and down steps and over rooftops in their Minis; a more potent, although unlikely, demonstration of the car's abilities would be hard to imagine.

Ultimately more than fifteen million Minis, in their various incarnations, were built; every one losing money for the manufacturer.