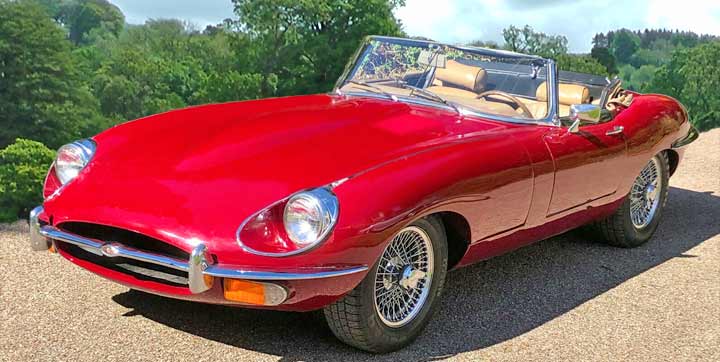 It is easy to underestimate just what an impact the E Jaguar had when it first made its debut in 1961. It is even rumoured that Ferrari went flat out to get it's GTO on the market, in case the E type dominated racing competitions beforehand. It's interesting to note that whereas the Ferrari was an out and out racing car, the owner of the E type could drive it home afterwards, and take his or her partner out to dinner in it!

No mistaking, this machine was fast. Road testers from the car magazine 'The Autocar' drove one, a two seater coupe, to it's debut in Geneva, and reported a maximum speed of 150 miles an hour. Whilst this speed was unlikely to be achieved by a production car (a little tweaking went on, surely!) It was still an impressive performance.

What was equally impressive however was the price. A brand-new coupe, fresh from the factory, could be had for £1550. Compare that to £6600 for a Ferrari 250GT; more than four times the price; and even £4000 or so for an Aston Martin DB4, and you start to wonder just how Jaguar could do it at the price.

Faster than most of the so-called super cars on the market, with a beautiful monocoque body and independent rear suspension, and powered by a bullet-proof 3.8 litre version of the venerable XK, twin cam, six – in – a- line engine, it was an absolute bargain. Most of all, though, it was absolutely beautiful, and even now many years later the sight of one can still make many a motorist misty eyed. It was even rumoured that no less than Enzo Ferrari, who owned one, described it as the most beautiful car in the world; and he was probably right.

More development continued. In 1964 a 4.2 litre engine came out for the Mark 2 and eventually a whopping 5.3 litre V12 was introduced in the Mark 3.

There is still much debate over which one was the most attractive; the coupe? Roadster? Certainly the first series with 3.8 litre engines is now the most sought-after, and expensive, with a good example fetching a quarter of a million pounds or more; but the later cars began to fall out of favour, and the reason was the need to sell then into the American market. Safety and emission regulations in the United States began to not only take the edge off it's performance but also changed its appearance, as rules about such matters as headlight and bumper design took their toll.

Many motorists have wondered why Jaguar stopped making it when they did; but the simple fact was that legislation was causing the car to not only produce less power, but also become heavier. There is a limit to the extent that larger engines can compensate for this. By 1975 the price of a V12 manual was £3750 and the car was starting to feel old-fashioned.

The brakes had never been a good point on the E type, it's road holding was not great as the front tended to lift somewhat at high speeds, the steering was no longer considered to be adequate and the level of comfort was less than people were expecting by then. The XJ-S, which the V12 engine had always been intended for, was about to come into production to supersede it. What a shame that, at least at first, British Leyland workmanship standards gave the XJ-S such a bad reputation.